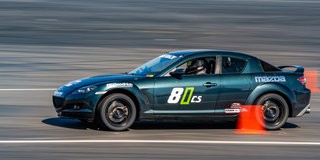 The 2019 Tire Rack SCCA® Championship Tour made its second stop in Concord, NC at the ZMAX Dragway for the Charlotte Championship Tour this weekend. Just one week after Dixie, competitors picked up where they left off last weekend and continued some close battles. Temperatures started each morning in the high 30s but quickly gave way to sunny skies and mid 60-degree weather, making for a beautiful weekend.

In A Street, Bill Bostic, Jason Ruggles and John Wolf picked up where they left off at Dixie and continued their tight battle for the top spot. Day one had Bostic in the lead over Ruggles by 0.3 second with Wolf sitting in third nearly a second back after cone trouble. Starting Day 2, Bostic put down a run to keep him a solid 0.7 second ahead of Ruggles. However, his co-driver, Wolf, set fast time of the day by nearly a half-second, putting him ahead of Ruggles.

The attention to C Street for this event was high with the debut of the ND2 Mazda Miata. But all eyes were on pro drivers Kenton Koch and Tom O’Gorman as the two teamed up in Koch’s Mazda RX-8 for this event. O’Gorman quickly took the lead on the second runs of day 1, but not before Darrin DiSimo took a 0.2-second lead on his final run in the ND2. DiSimo and O’Gorman would continue their close battle going into Day 2 with Ken Houseal and Koch fighting for the last spot on the podium. O’Gorman took the lead once more on his final run but had to wait for the rest of the leaders to take their final runs before claiming victory. DiSimo set his fastest time of the day on his third run, but ultimately fell 0.128 second behind O’Gorman to take second place. Houseal managed third place, 0.4-second back with Koch sitting another 0.8-second back in fourth.

This weekend was also the first of the 2019 CAM Challenge events along with a new, index-based Challenge for non-CAM cars after the conclusion of Champ Tour competition runs.

The CAM Challenge saw the top nine drivers, three from each CAM class, compete in a shootout for the Top Index Time. In a matter 15 minutes, the top nine were whittled down to three, with all three CAM classes being represented. Brian Johns represented CAM T in a Chevrolet Chevelle, Shane Irving was in a Ford Mustang Represented CAM C and Justin Peachey in his CAM S Chevrolet Corvette Z06. Cone trouble in the Chevelle put Johns in third. Shane Irving set his best time of the day in the Mustang, but ultimately Justin Peachey got it done in one and took the top spot in the CAM Challenge in his Corvette Z06.

The Champ Tour Drivers Challenge saw the C Street winner, O’Gorman, facing off against SSC winner, Mike Lawson, E Street second-place finisher, Sean Minehart, and Super Street winner, Doug Rowse, in the top four out of the Initial 12 drivers who started the Challenge. Mike Lawson was first out and set the time to beat, but O’Gorman quickly responded seconds later and moved into first place. Next in was Minehart who bumped Lawson to third, but not before Rowse put down his fast time and moved to second behind O’Gorman.

The Champ Tour Bonus Challenge went just as quickly as the rest. Ultimately, it came down to Kenton Koch, in his C Street Mazda RX-8, Trevor Blackwell, driving Alan Claffie’s STR Mazda Miata, and Nicholas Phillips, in his A Street Chevrolet Corvette Z06. The STR NC known as “Bruce,” piloted by Trevor Blackwell took home the honors on a hero run.